Songdo city aims to be an international trading hub. It will become a strong economic zone in yellow sea economic basin. Songdo IBD as “smart city” had 20,000 residents and around 12 billion invested in 2012. Until 2018 the population is growing into 50,000.

Library buildings have assumed social and symbolic roles in societies across the world and for generations. As a building, the library has been known to connote eminence, and to integrally link knowledge with power. In recent years, the role and significance of library buildings has changed; with expansive and centrally located urban spaces, some libraries serve as community centers, public squares or think tanks.

The Taegeuk is a traditional Korean symbol, commonly associated with Korean tradition and represents balance in the universe. This balance is, similarly, expressed as the familiar Korean symbol called Yin-Yang. The concept of Yin and Yang became embedded into the spatial composition Book Box. Two distinct spaces are interlocked within a larger volume which also comprise the rectangular box with dimensions 50.5 x 50.5 x 21.6 meters. The Yin Space serves as an open platform for social interactions within, while the physical presence of the building will intentionally express the underlying implications of the program.

Songdo IBD is becoming known as hi-tech hub; a burgeoning Smart City that has technology embedded into the fabric of the built environment. There are sensors on every block that monitor environmental phenomena like temperature, energy, and traffic movements, and even safety is technologically revolutionised, with authorities in contact with incident at the push of a button. Space-age water recycling systems and advanced charging stations for automobiles are all running in Songdo IBD, and with all this smart technology, Songdo IBD is becoming a model for the next generation of so-called Smart Cities.

The new Songdo library will absorb the intention of it’s city and bring smart technologies into the what some consider to be an old or traditional building program. Bridging the gap between the services offered by the libraries and the rapidly changing and competing needs of the local and international informatically-linked world. Songdo library will help redefine indexing technology with a library App, and this will not only be accessed by smartphones, it will reflect the underlying information technology that connects the library data base to the physical structures that house the physical books.

Given the novel site location, the Songdo library has the potential to become an international cultural exchange. The population of Songdo area has many international residents, and these people are learning how to integrate into Korean culture. The library is an ideal location for learning about Korean culture, especially through special local events that can be affiliated with the new building. The building will become an integral part of an iconic city, especially by hosting international events, and conferences that attract IT, Biotech, and various technological enterprises.

The library is more than a building where people borrow old books. The library has come to represent the power of exchanging knowledge through communication. As the location adjacent to the University of Inchon, it will attract more student participation, such as TED and workplace seminars, it also will provide a real platform for future start-ups, and entrepreneurial offices.

Creating a connection through the diagonal line of the box, it generates three important event plazas, using for diverse requirement from surrounding, such as the kids from the Yesong kindergarten, the local residents from Sharp apartment and the students from University of Incheon Songdo Campus.

According to the step 2, we continue to divide the box into three important programs as the brief, which are material, culture&education and work&management with total 6300m².

According the precise GFA, we shape the two volume of triangle as book terrace towards the centre of the book box, in the meanwhile we lift up the work & arrangement volume. Three important event plazas are intergrated with the centre of the interior void of public. The plaza towards the southwest setup as a sunken garden, which is direct connected with underground auditorium, accommodating 226 audiences, with an independent entrance.

Interior space is interweaved with outdoor plaza. The public domain of book box is used for cultural event, and creating a centre of communication space for people who living around. It will become knowledge exchange space for public, promoting a social cohesion. We create a ginkgo tree park in-between site and Coversia road, in order to reducing the noice, in the meanwhile to guiding the students from university of Incheon and the workers from high-tech office ,such as IBM Business park at the east. The three plazas are integrated with interior public space, accommodating diversity of social activities, such as TED, or international high-tech conference.

Through the central event space, the public could step up to the viewing platform at the rooftop, which is facing Jack-Nicklaus golf club. It also could be rent and arranged independently during different festival and events.

From June to August, wind at the Incheon District was found to vary in speed and direction. Annually, the direction of wind is predominantly southeast.

Radiation simulation on the Peak Design Day (July 21st) is for esitmating the HVAC requirements during the cooling season. With this energy system in mind, the glass part of facade has been designed with a special system for shading, and integrated solar panelling along the roof will also take advantage of the solar energy.

Humidity is bad! Fungus and mold thrive in highly humid spaces and this will destroy books quickly. Low humidity can also be bad since dry air causes pages of a book to become brittle and crack. The composition of the facade and strategic distribution of the program keeps humidty away from fragile books. The Dew Point has been calculated to fall at the exterior fot the thermal layer and the temperatures can be safely kept lower than 23°C (ideal for safe-keeping books) and relative a humidity between 40% and 60%.

The vertical wind profifile analyis is adjusted for Inchon wind speeds, based on height above ground. The wind speed algorythm (EnergyPlus.com) uses a simple Power Law*. In order to develop a natural ventilation strategy, a series of openings at the rooftop, combined with operable louvers at ground level, takes advantage of pressure differential, and may be suitable to create an airflow that will supplement mechanical ventilation through the large public atrium.

When storing books, it is recommended to keep the temperature below 23°C. As the redaction testing for the interior, we find the bookshelf in the reading area absorb much more sunlight, so we added a row of sun shading system at the roof top , combing with roof gird structure. Keep books out of direct sunlight. UV radiation can cause paper to yellow and ink to fade.

The event platform has been setup at the 4th floor, with great view quality facing the Jack-Nicklaus golf club. It also could be rent and arranged independently during different festival and events. 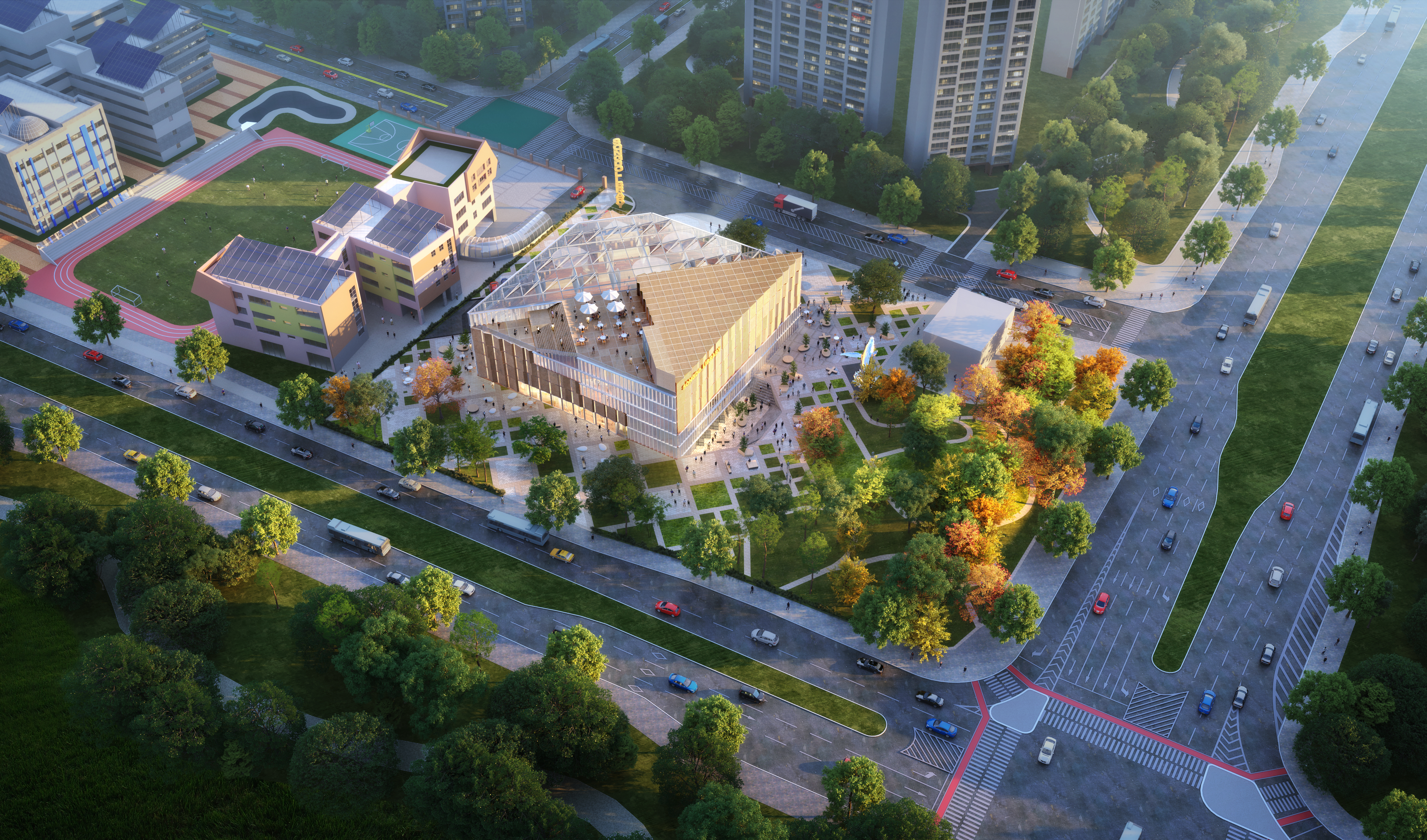 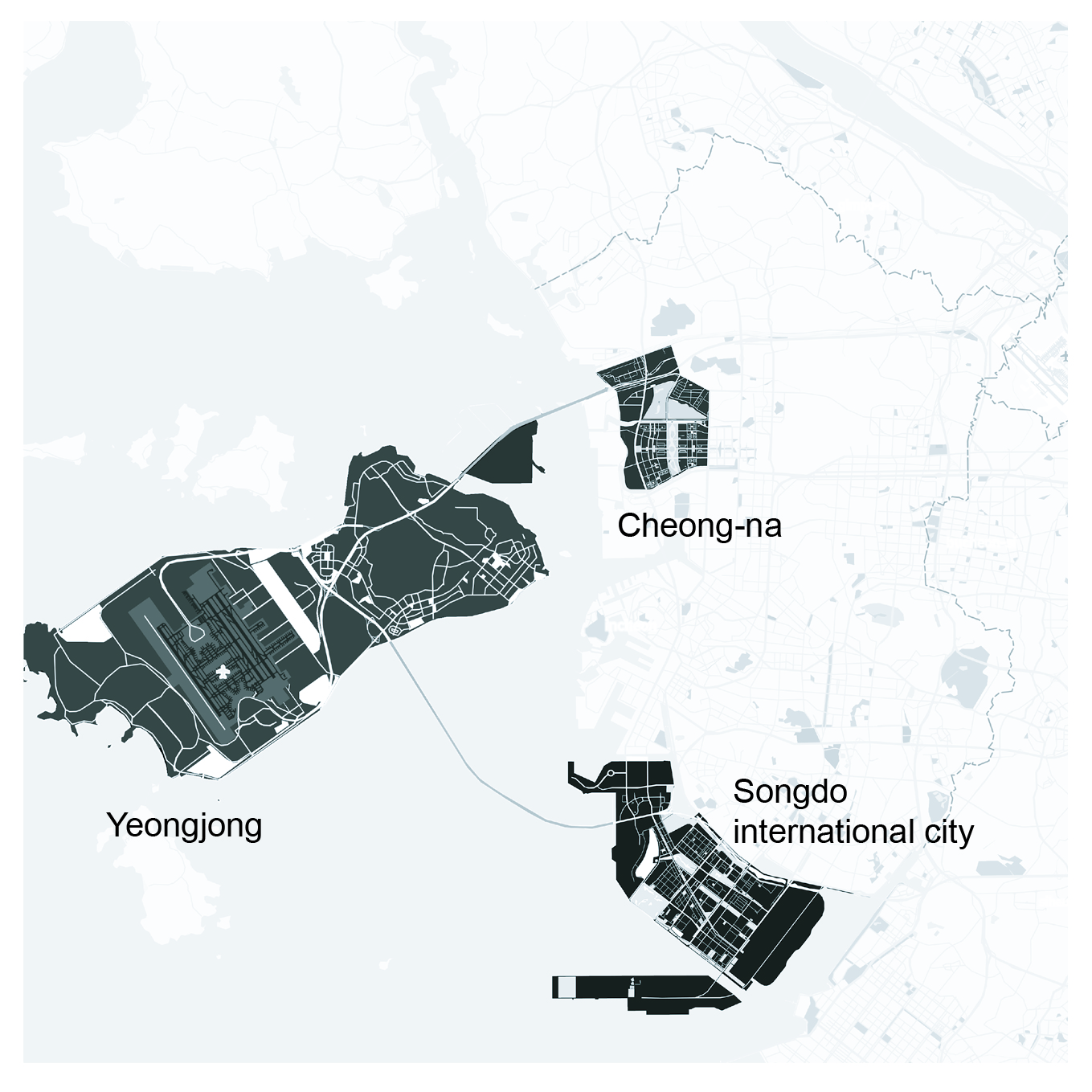 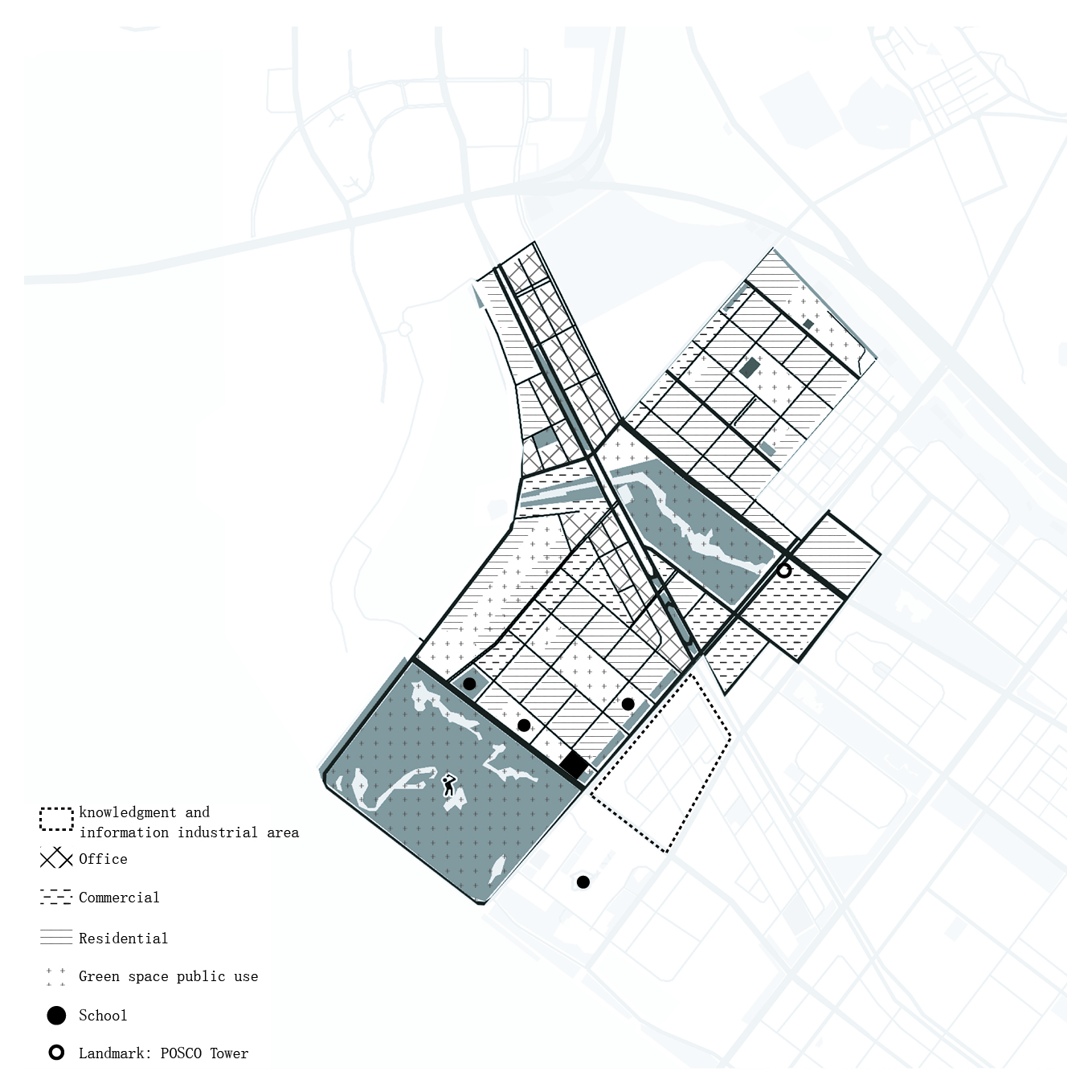 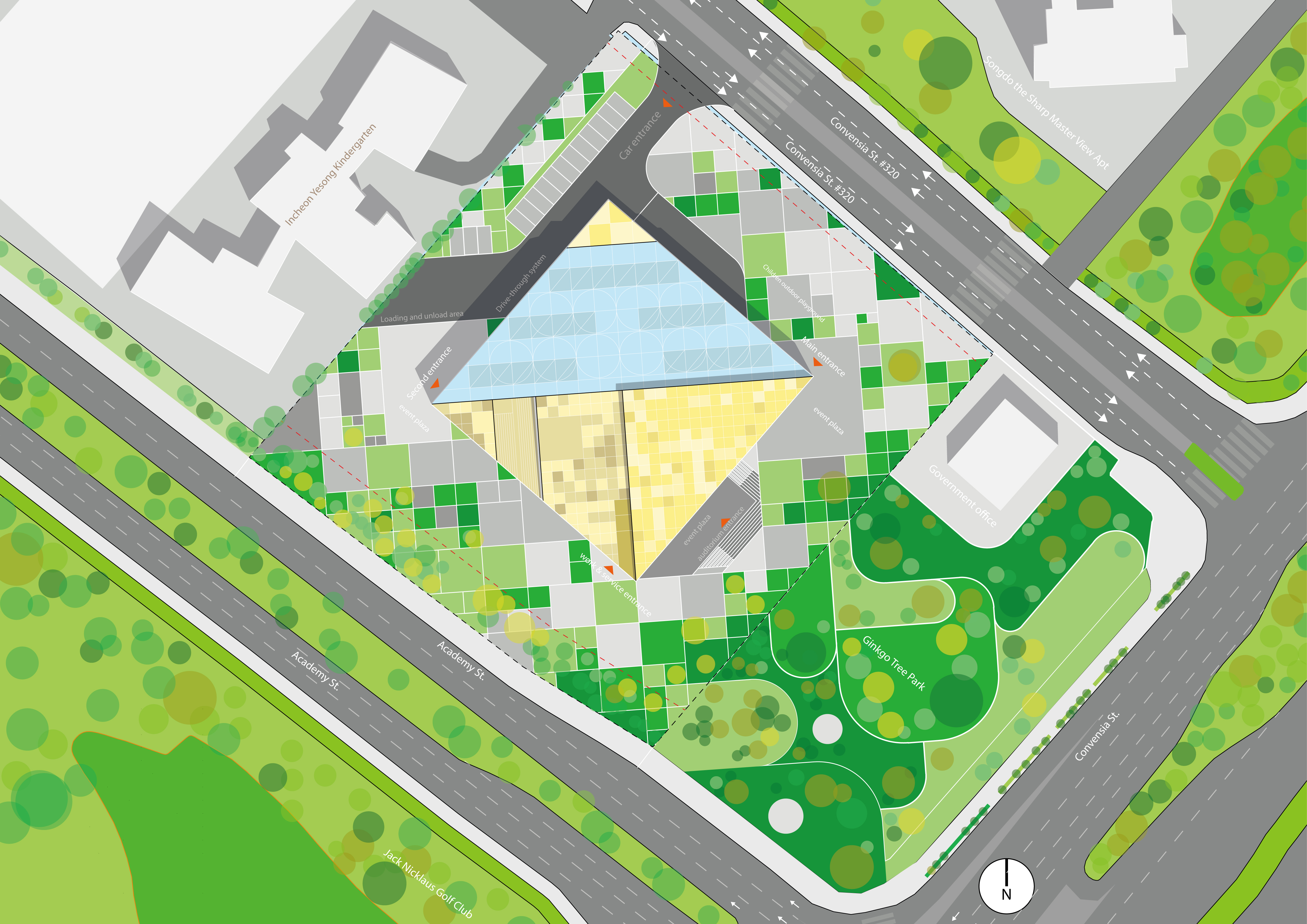 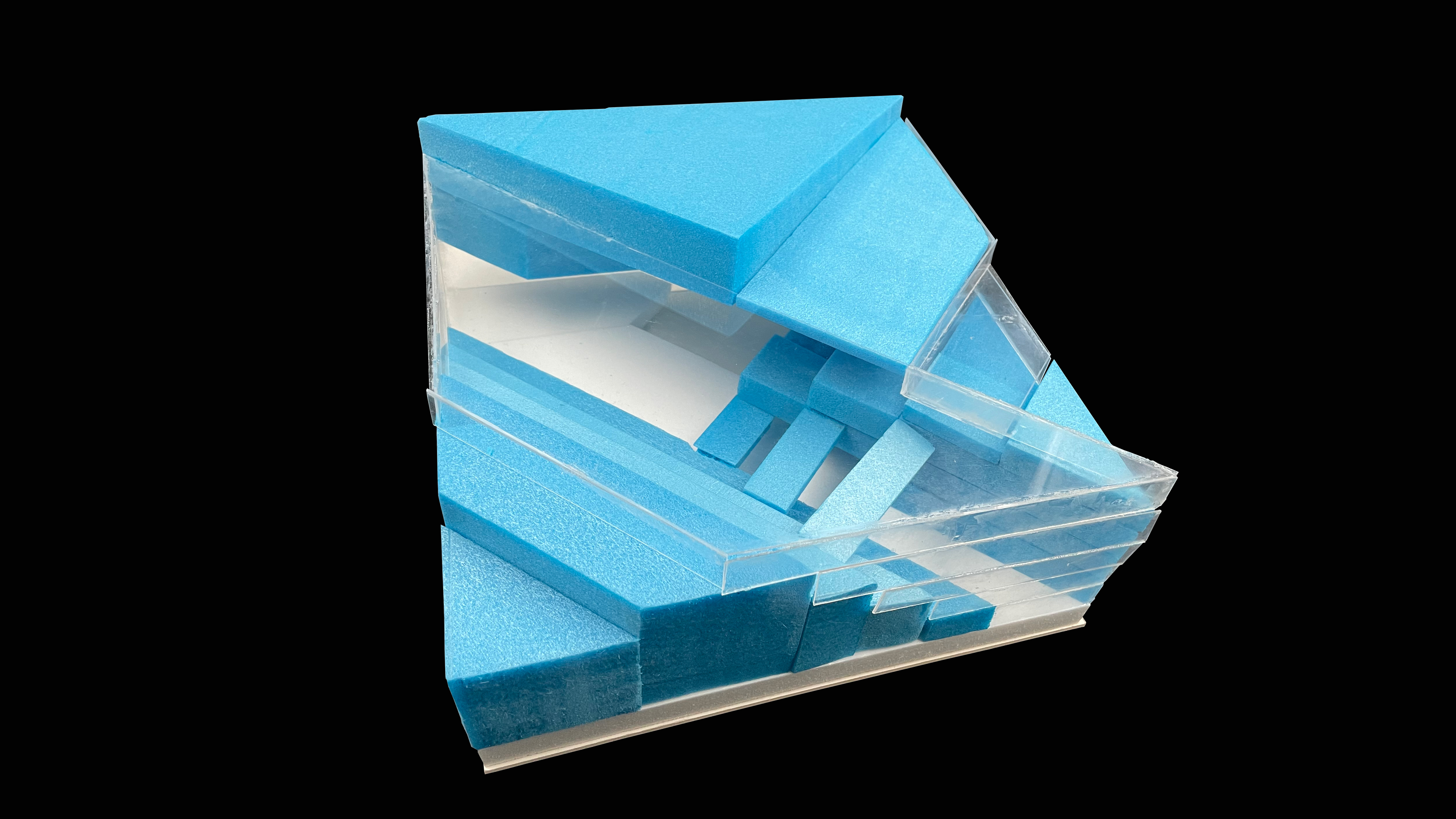 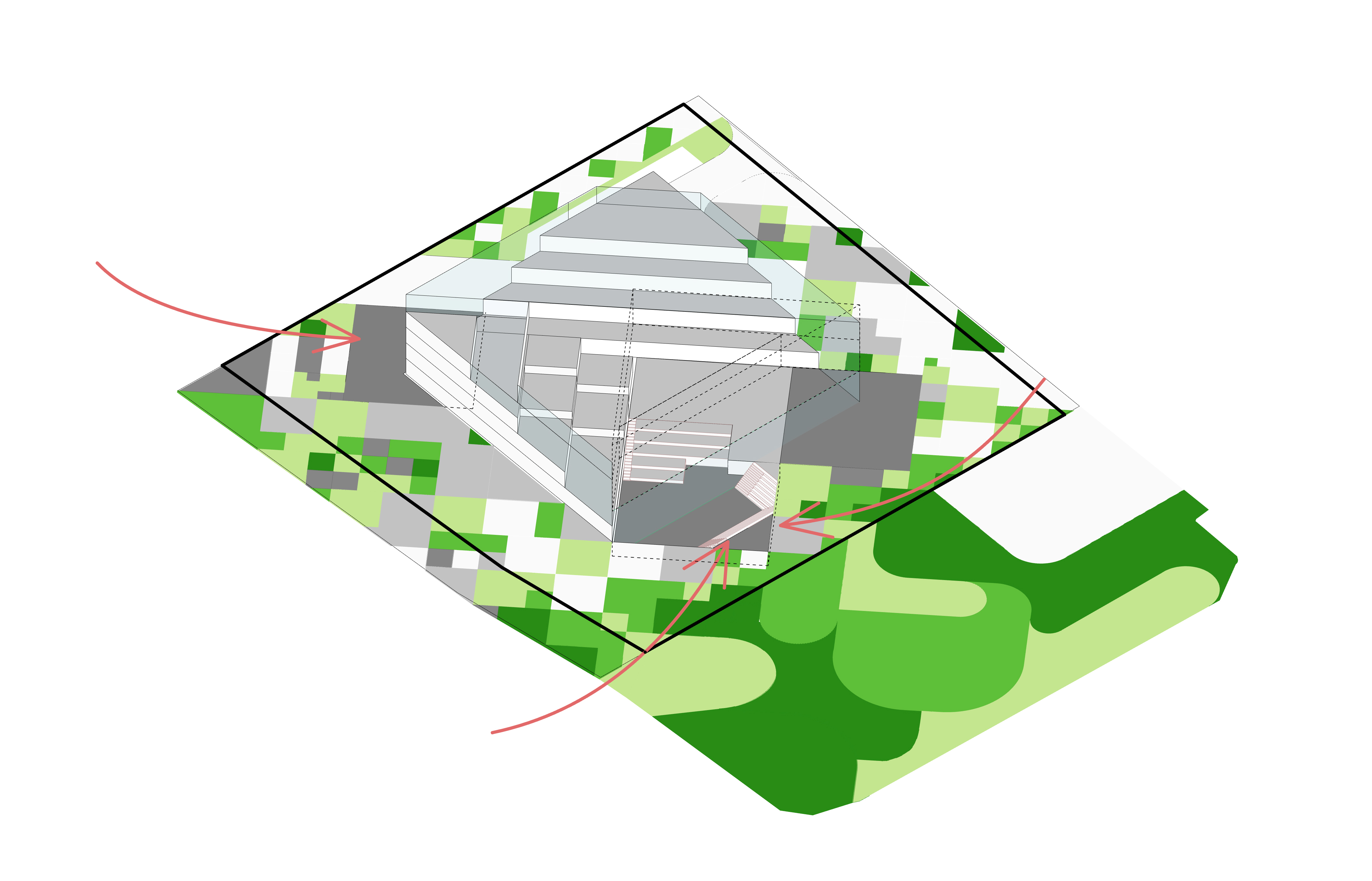