Shanghai is transitioning, and the contemporary cosmopolitan values of a city are superimposed over the fading text of the palimpsest. Located in the industrial zone’s Yangpu District, the architecture office JOA has opened their doors.

During the 19th century, important factories, and shipyards, some built by German industrialists, defined a mechanistic landscape. Today, the area where the Shanghai the manufacturing factory of mechanical equipment stand, there is a shift towards a sense of newness.

Along with a fascination for new ideas and technology, JOA embraces duality as a central theme in their design. Duality implies embracing the old while absorbing what is new, and cautiously considering the symbolic connotations imposed by architecture, within an established framework of values. This notion of duality is not entirely novel, and it ties into other dualities like cosmopolitanism versus rurality. These dualities characterise architectural discourse and are eventually formalised as distinct typologies.

Inseparable from architecture is construction, and market-driven newness is part of the construction business. While architecture is quick to absorb fresh ideas, architects tend to embrace established values, and dutifully resist unbridled progressive idealism. In this sense, the co-existence of new and old will remain a central theme for JOA, and they have made a conscious effort to articulate the interplay between New and Old.

JOA’s tells a new story in an old place:

Structuralism: integrated within a concrete frame, and seemingly floating between the walls, a delicate platform floats above the ground. The original structure has been re-considered by introducing this canopy-platform; supported by a structural beam, that has been embedded into the existing wall. The composition reinforces both the structural frame of the new space and creates and subtle link between new and old.

Figure-ground (Gestalt-Theory): the impressive five-meter height is split in two; the ‘model-making’ room and the meeting-room. They now exist simultaneously; divided by a time-schedule, rather than split by a physical separation. The new rooms shimmer, like a precious metal, within the grey rocks of a stone quarry. This is nod to the concept of figure-ground, established in the Gestalt design theory of the early 19th century.

Cinematic lighting: the office is clustered in two lighting systems. The first system is a series of spotlights with dramatic effect. For example, a ‘chiaroscuro’-quality is produced with an almost cinematic flair, where the reflective materials of a bookshelf are set against a dark backdrop of a painted wall. The second lighting system sets the general mood throughout the office and coats the space with an evenly distributed veil of light. The simple combination of lighting systems creates a series of independent zones freed from any type of antiquated or deliberate hierarchical spatial definitions. 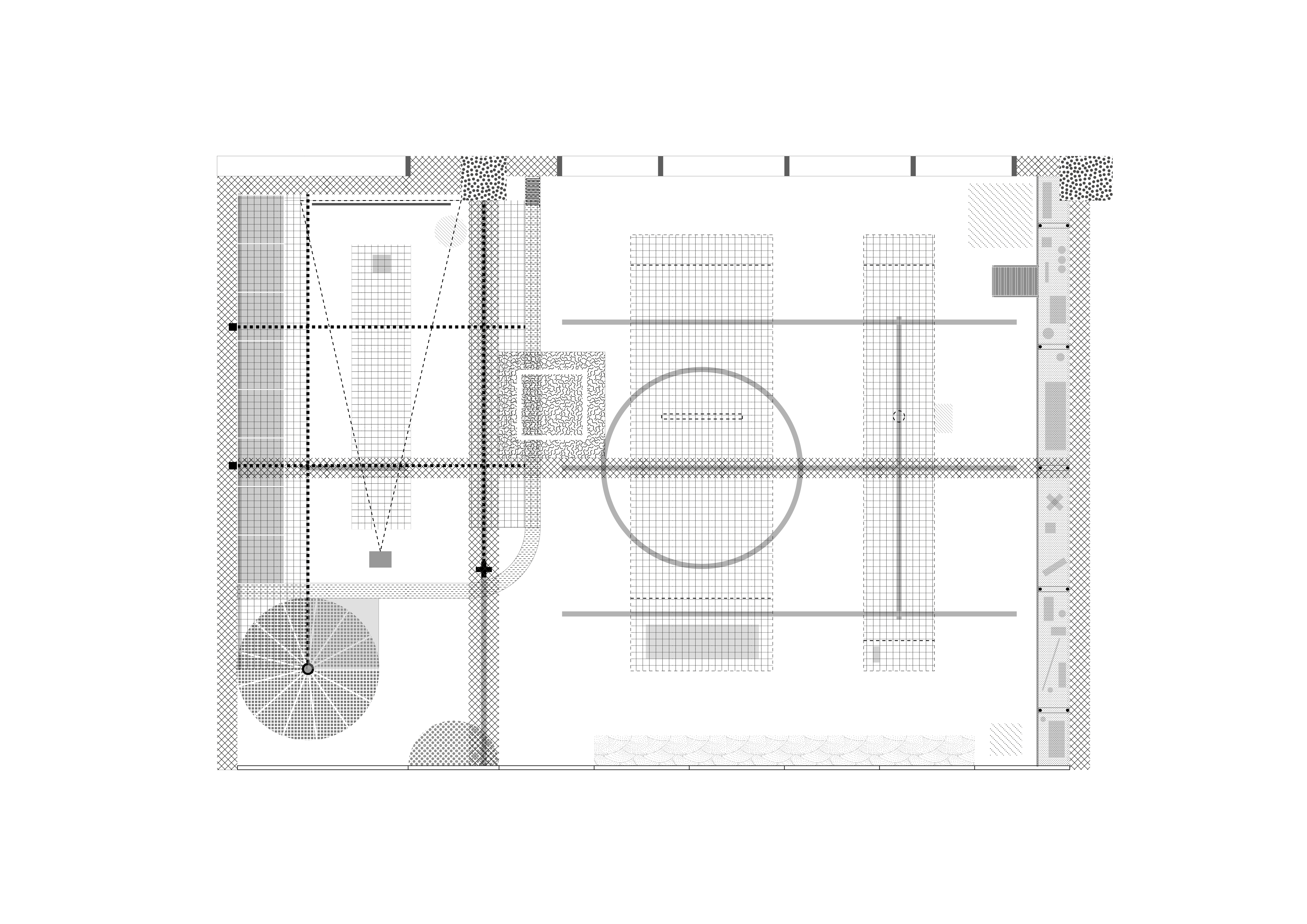 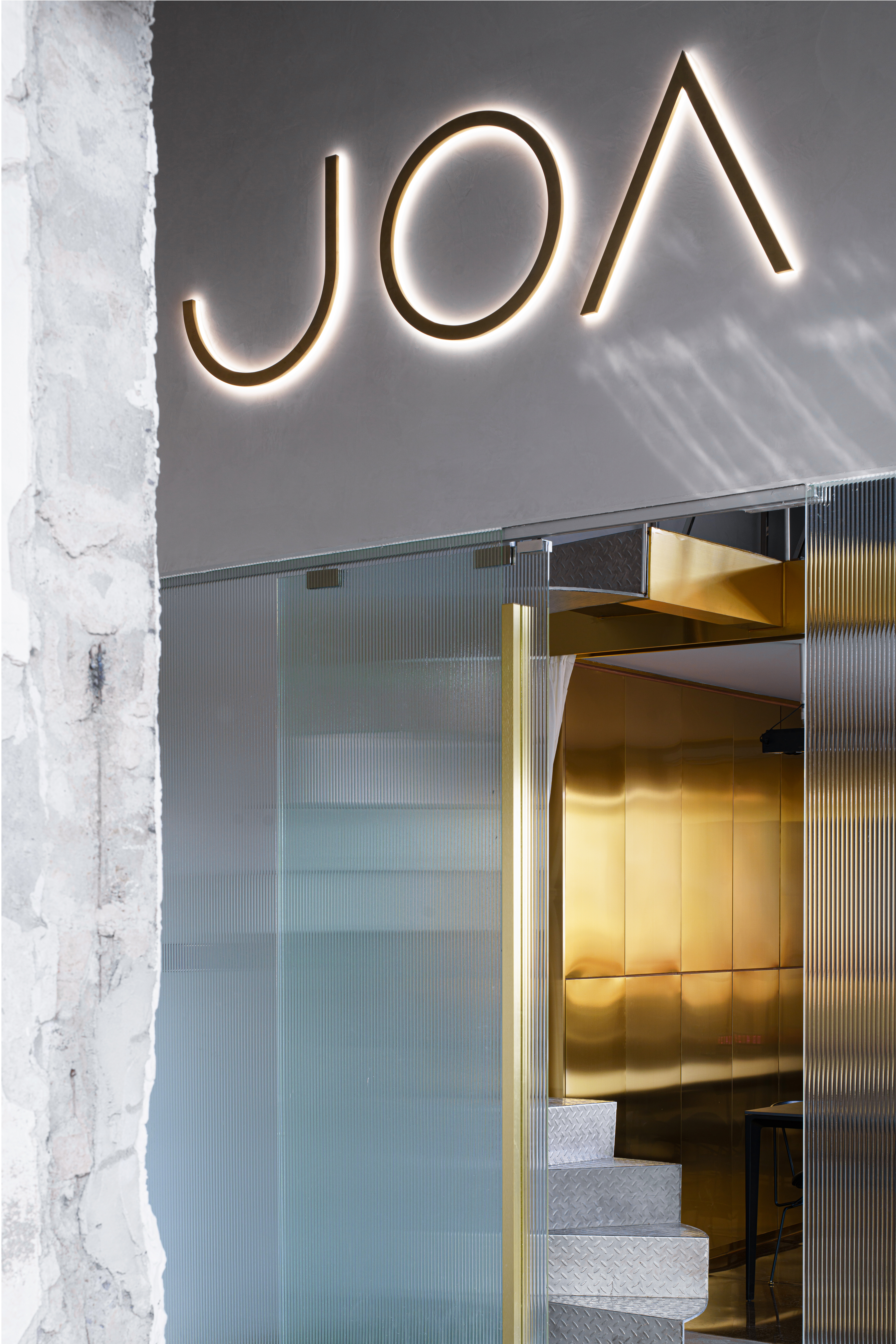 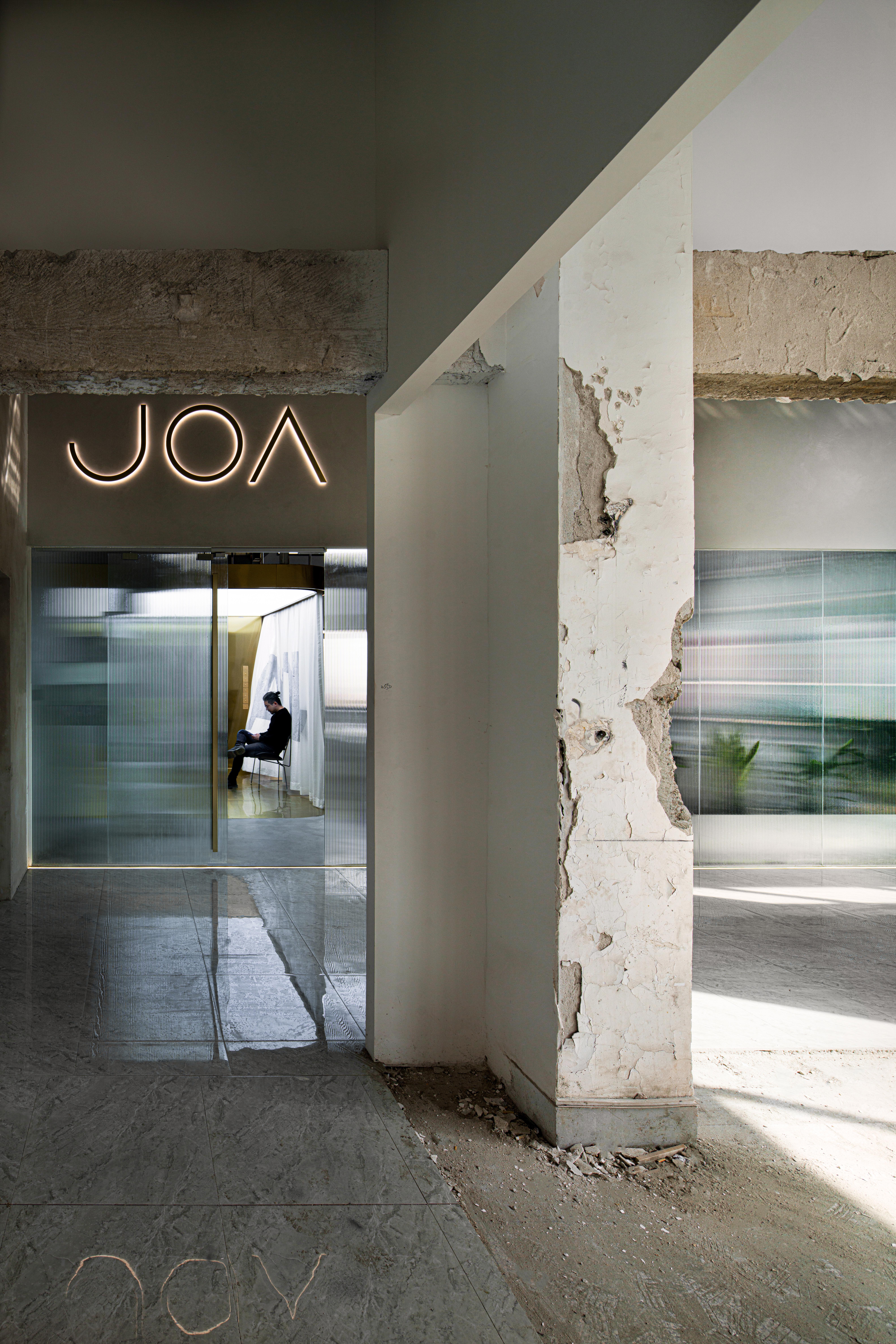 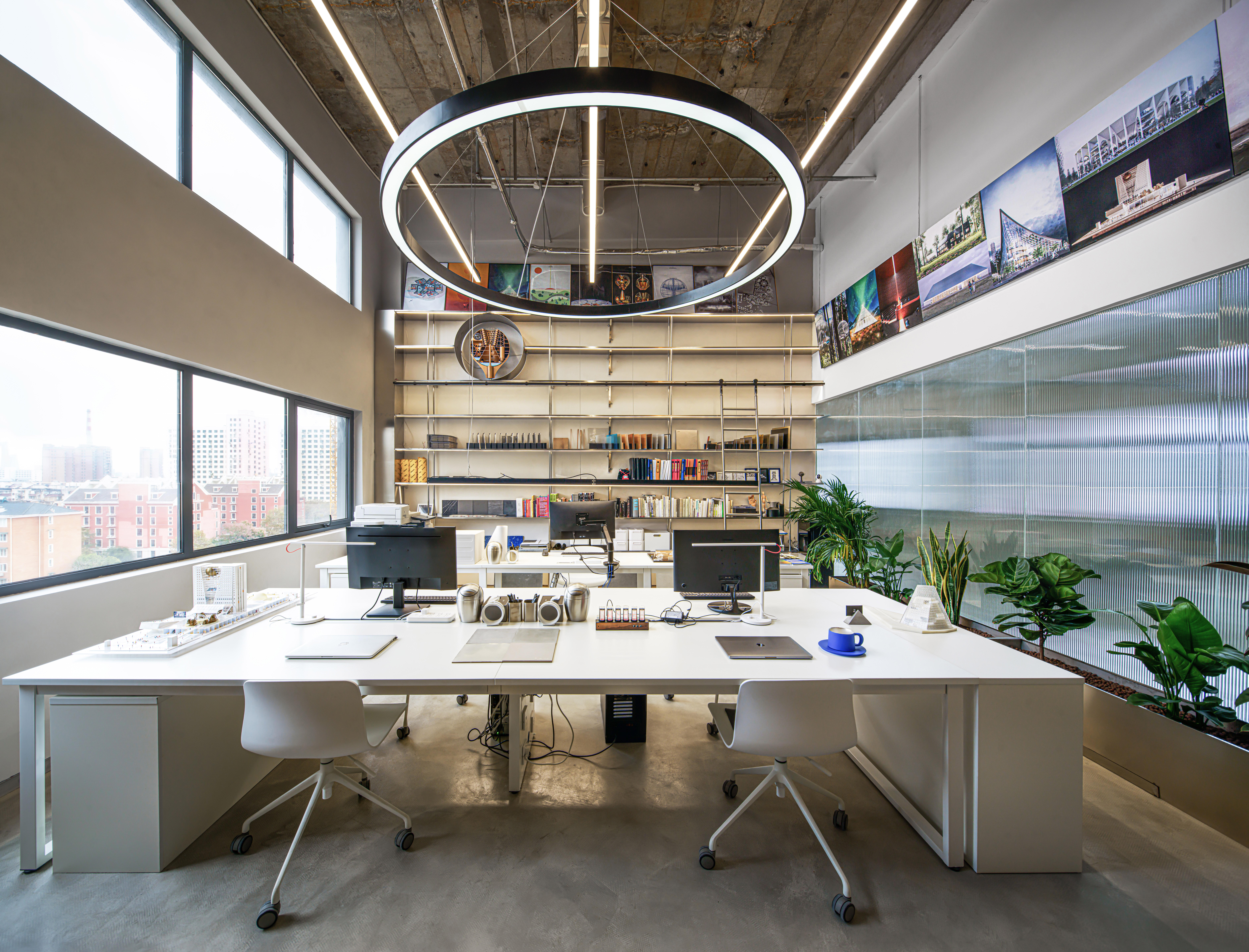 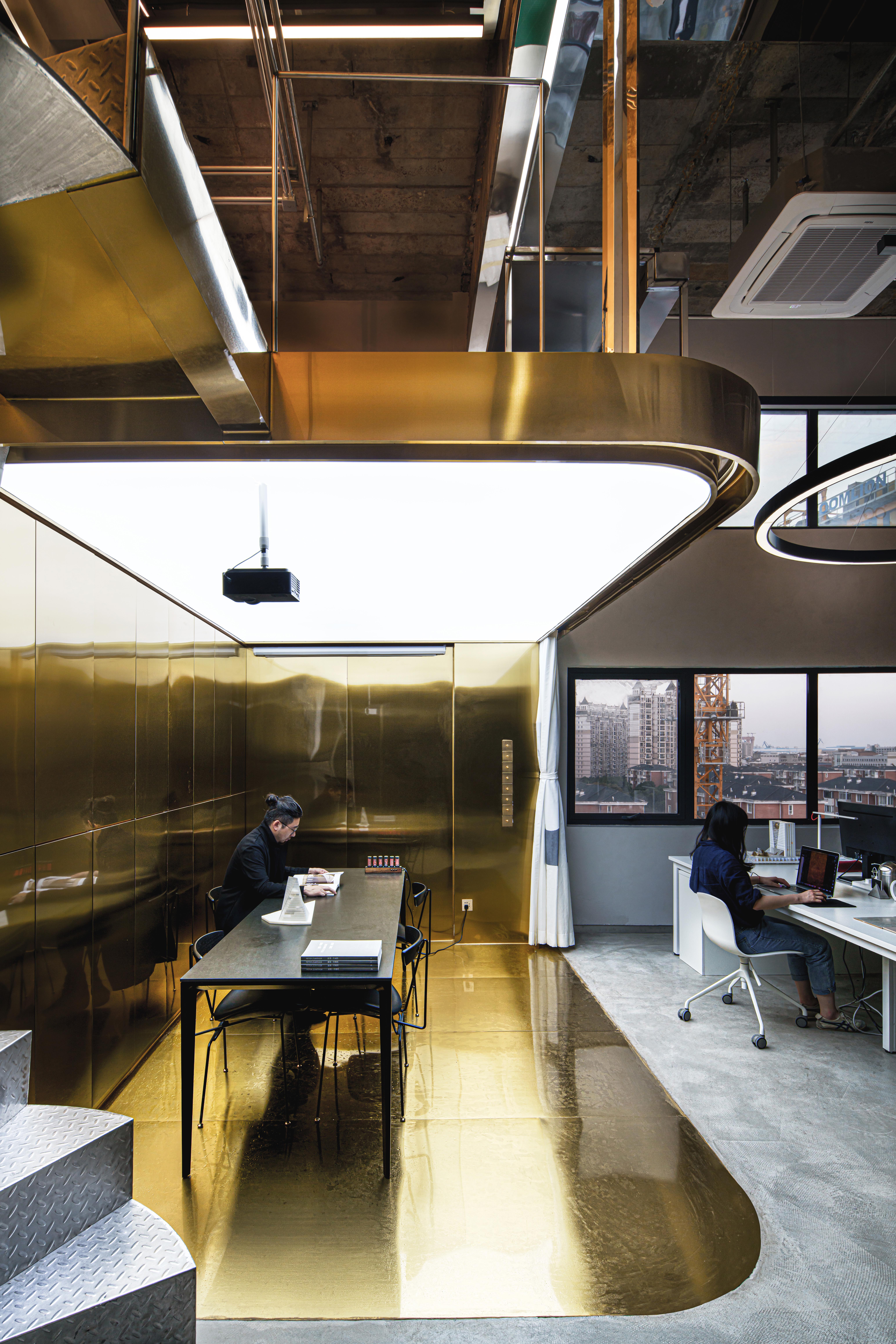 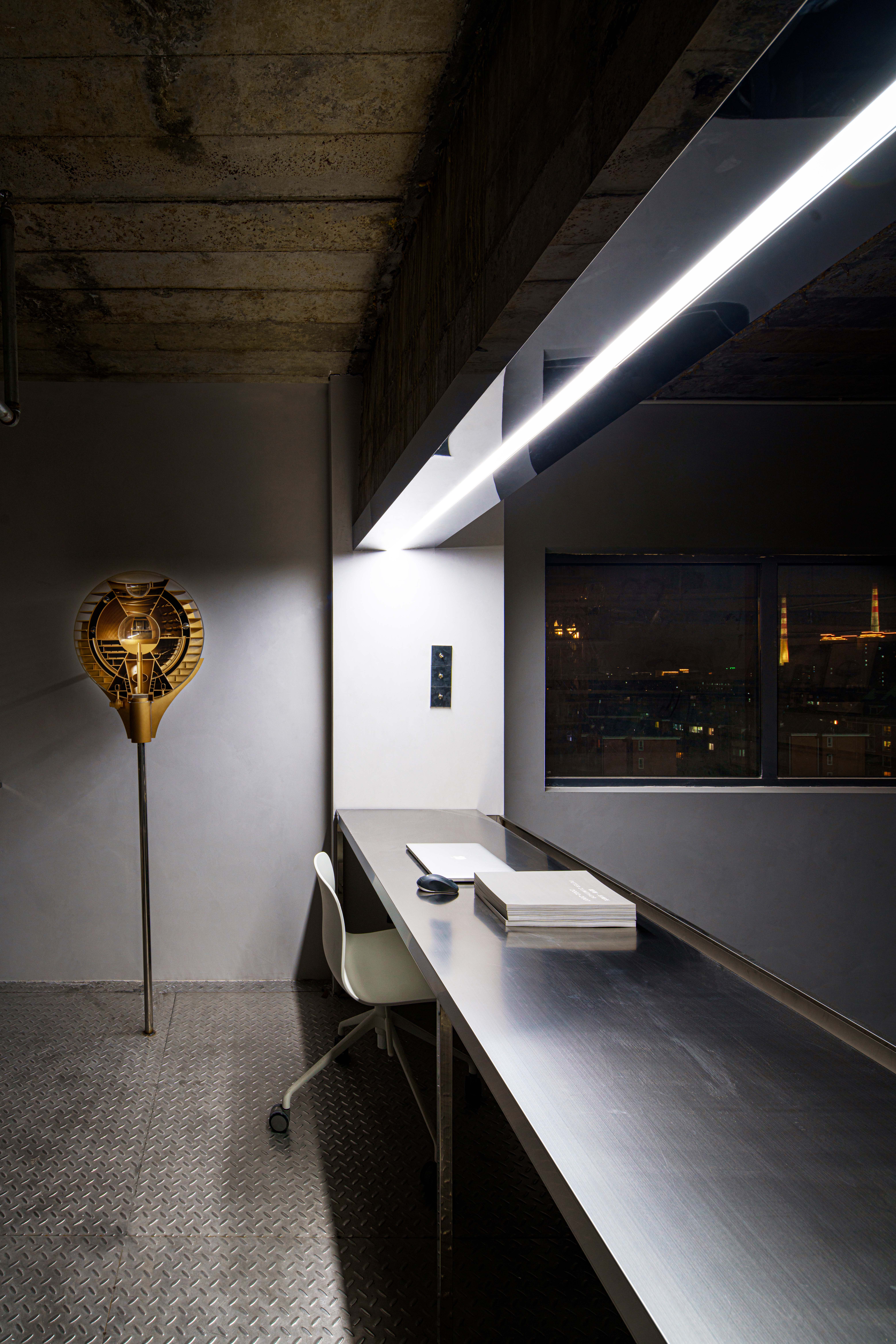 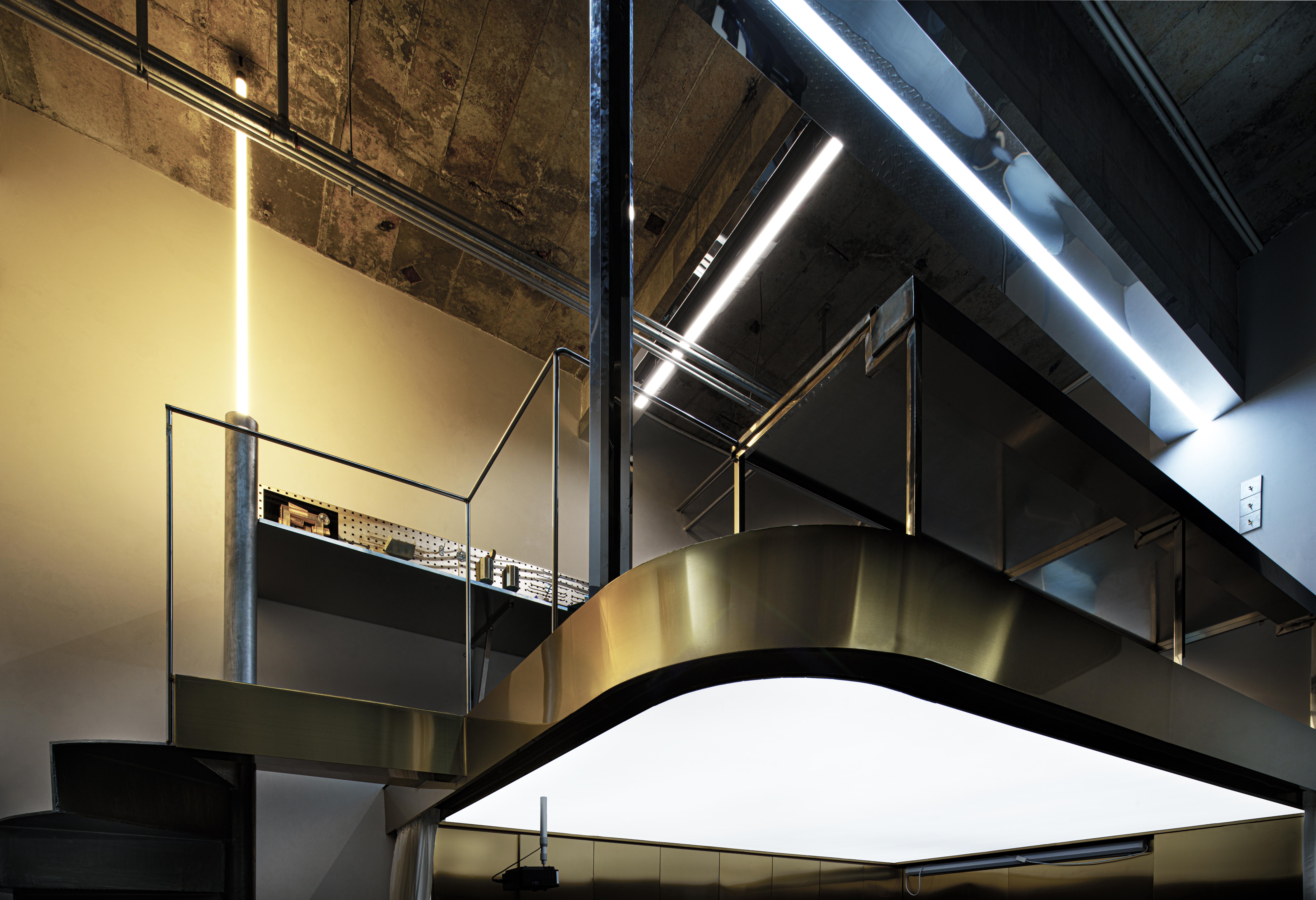 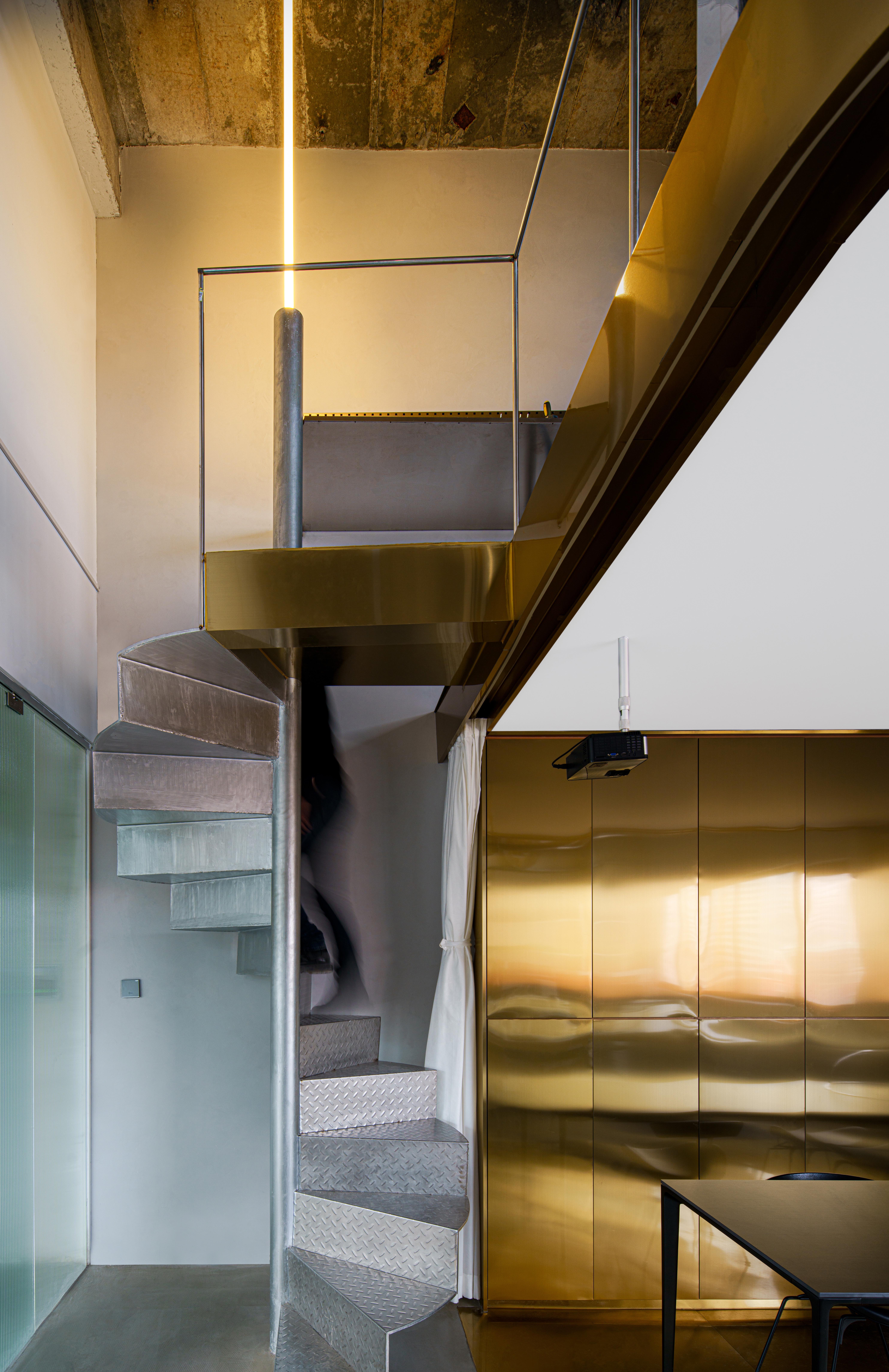 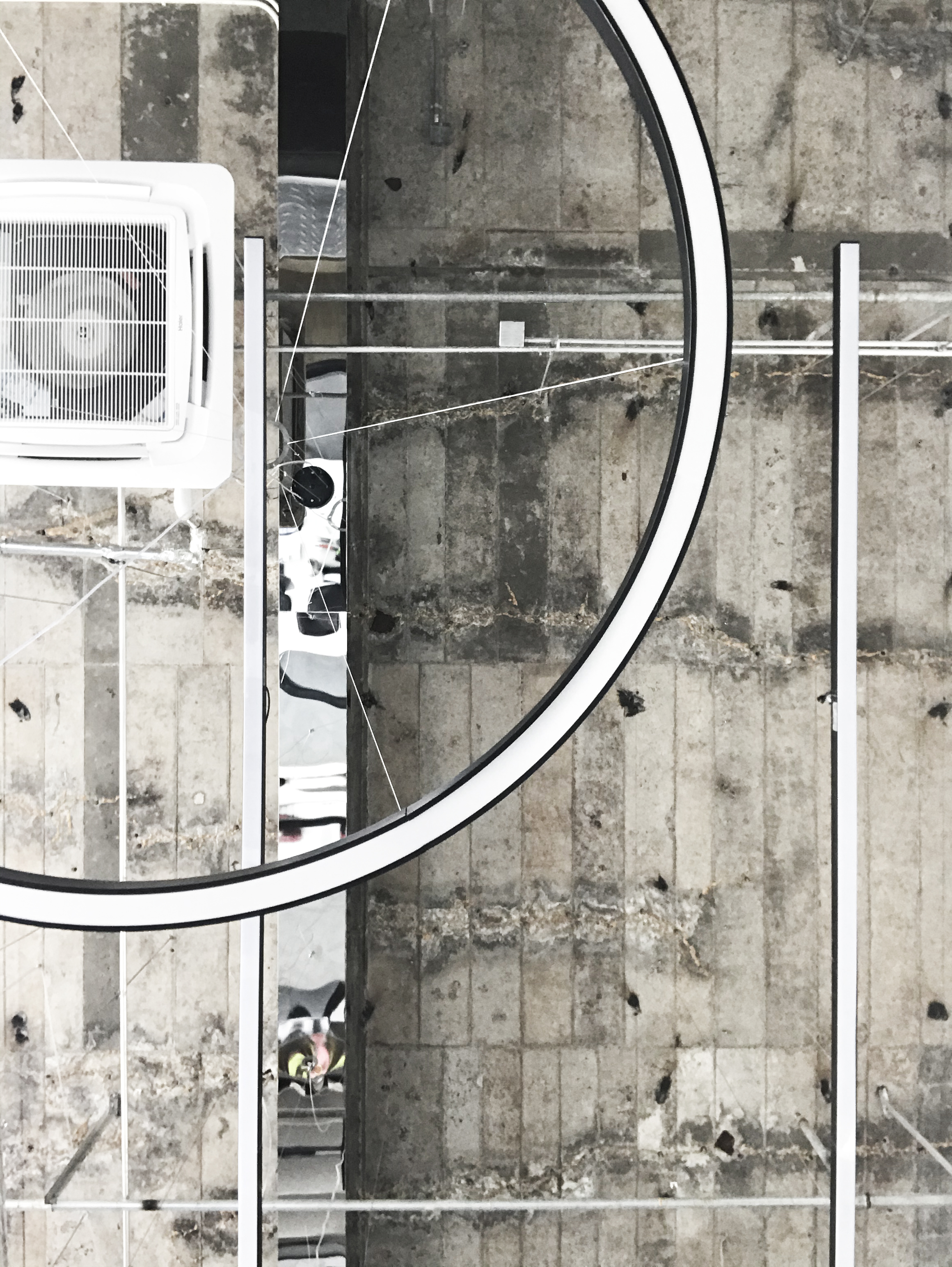 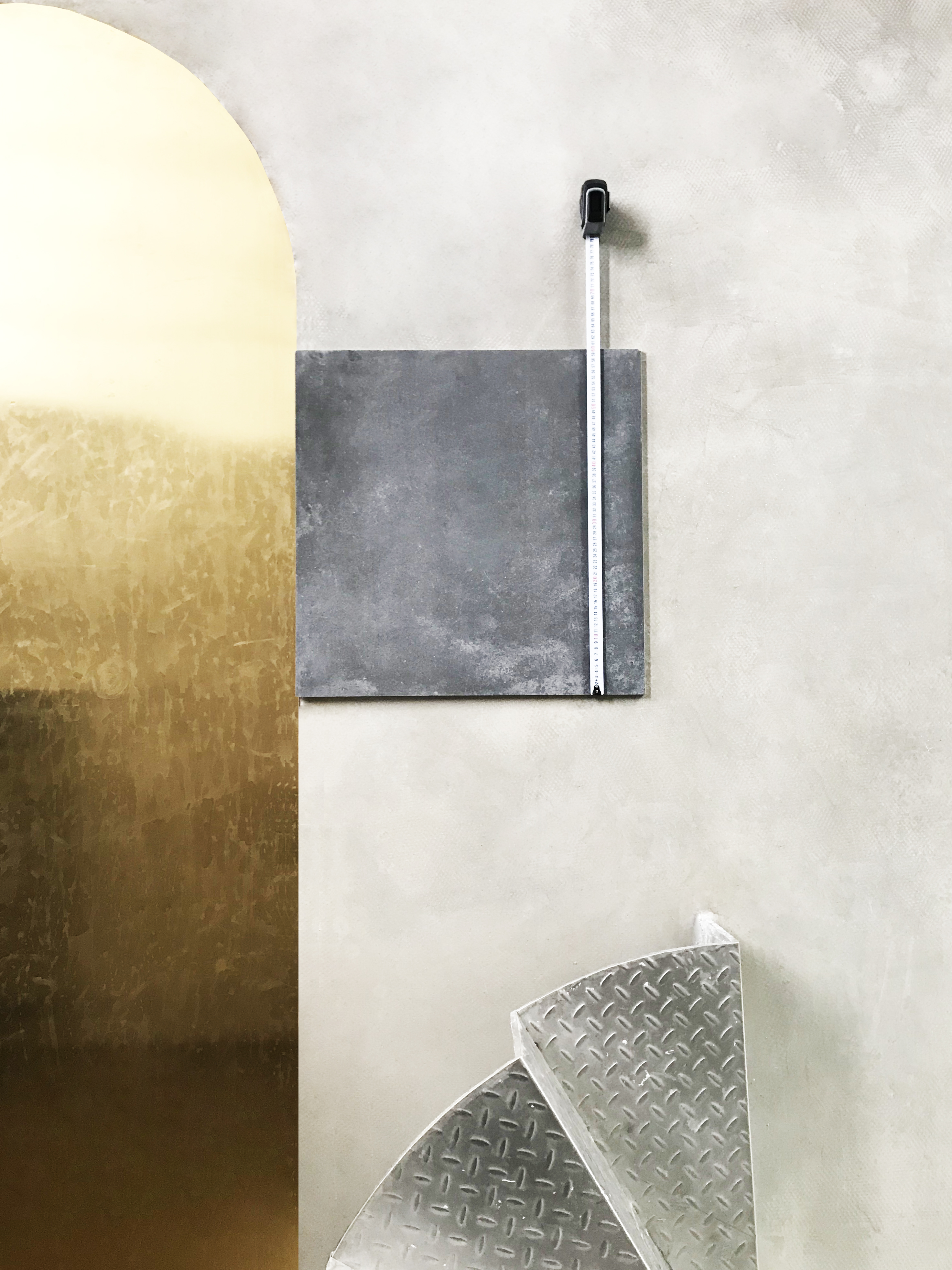