Housing is universal and durable topic，it also has a particularity. According to statistics from the United Nations, more than 50% of the world’s population lives in cities. Until 2019, the average residential land-use in Chinese major cities accounts for 32.3% of the overall construction site, in Japan, the number is 44% in three largest City areas, and for New York is 38%. Housing is not only a major stage of everybody's life, but also an inseparable part of every modern city. It is a part of “ Genius Loci”. Housing of a place often closely related to the local culture, reflecting on the distinctive urban context: the domestic behaviour, requirement, climate, financial ability, and religious of people from various classes, as well as the other influencing factors behind them as driving forces.

That becomes an interest for us to dig out the trues from the phenomenon. During the research, we made a further definition: Those “top-down” can be called "modern" in China. Regulations and capital games, due to political reasons, are relatively new things that have only appeared in China in the past half-century. Correspondingly, those “bottom-up” can also be called "heritage". The development of Chinese housing to a large extent is the natural and spontaneous behaviour of the people and society. It depends on one‘s aesthetics and expectations, with also the influence of local culture and collective memory, which for the Chinese, are "heritages" passed down from generation to generation. During the Globalisation, The conflict and compromise of the "modern / heritage" of housing condition in China become much more obvious. And SBAU 2021 will be a perfect platform to show our research to the public.

As mentioned in the content proposal, the exhibition will show specific cases belonging to two categories, to present our research on the conflict and compromise of the "modern / heritage" factors of housing in China. The two categories can be subdivided into several specific groups. The groups with cases dominated by "modern" factors, which are “top-down” policy or capital game. These groups include socialist new rural housing, affordable housing, second-hand housing, commodity housing, and "ghost city". The groups with cases dominated by "heritage" factors, which are “bottom-up”, spontaneously based on people's needs or traditions. These groups include illegal construction, slum and settlement, housing in urban village, housing in rural–urban fringe, rural villa, and traditional housing.

The exhibition design is based on the type of “passage". Using two semi-circular high walls to display the contents of "modern" and "heritage" category, while the narrow entrance and exit that only allows one person to pass through strengthen the sense of conflict between the two sides. There are also signages on the platforms and the upper edges of the walls on both sides. In addition, there are theme colours on both sides that are used to strengthen the sense of distinction. Red represents "modern" factors. On the one hand, red easily triggers associations about China's communist political environment; on the other hand, red represents radical and powerful forces. Blue represents the "heritage" factors. Because it is usually associated features of autonomy and freedom, which overlap with the driving force of the "heritage" factor in our definition. The use of theme colours includes but is not limited to signs, lights, posters and models on the walls, etc.

The contents of the two categories of "modern" and "heritage" presented in the exhibition include introductions and specific cases. The exterior facades of the two walls are collages of various cases belonging to two categories (refer to p4), giving the audience a first impression of "modern / heritage". Entering inside the arc walls on both sides, the lower part of the wall illustrates the evolution respectively (refer to p1 and p4). According to the timeline and related historical and economic events that may have an impact, various subdivision groups and are typical cases are shown with a brief introduction. The upper part of the wall displays a selection of models of representative cases belonging to each subdivision group (refer to p3), connected to the evolution diagram below with a light strip, allowing visitors to have an intuitive perception of it. There are also booklets hanging on both sides, presenting a lot more cases in detail (refer to p2 for draft version), including case information, background, development process, photos, plan/elevation/section, and axonometric drawings. 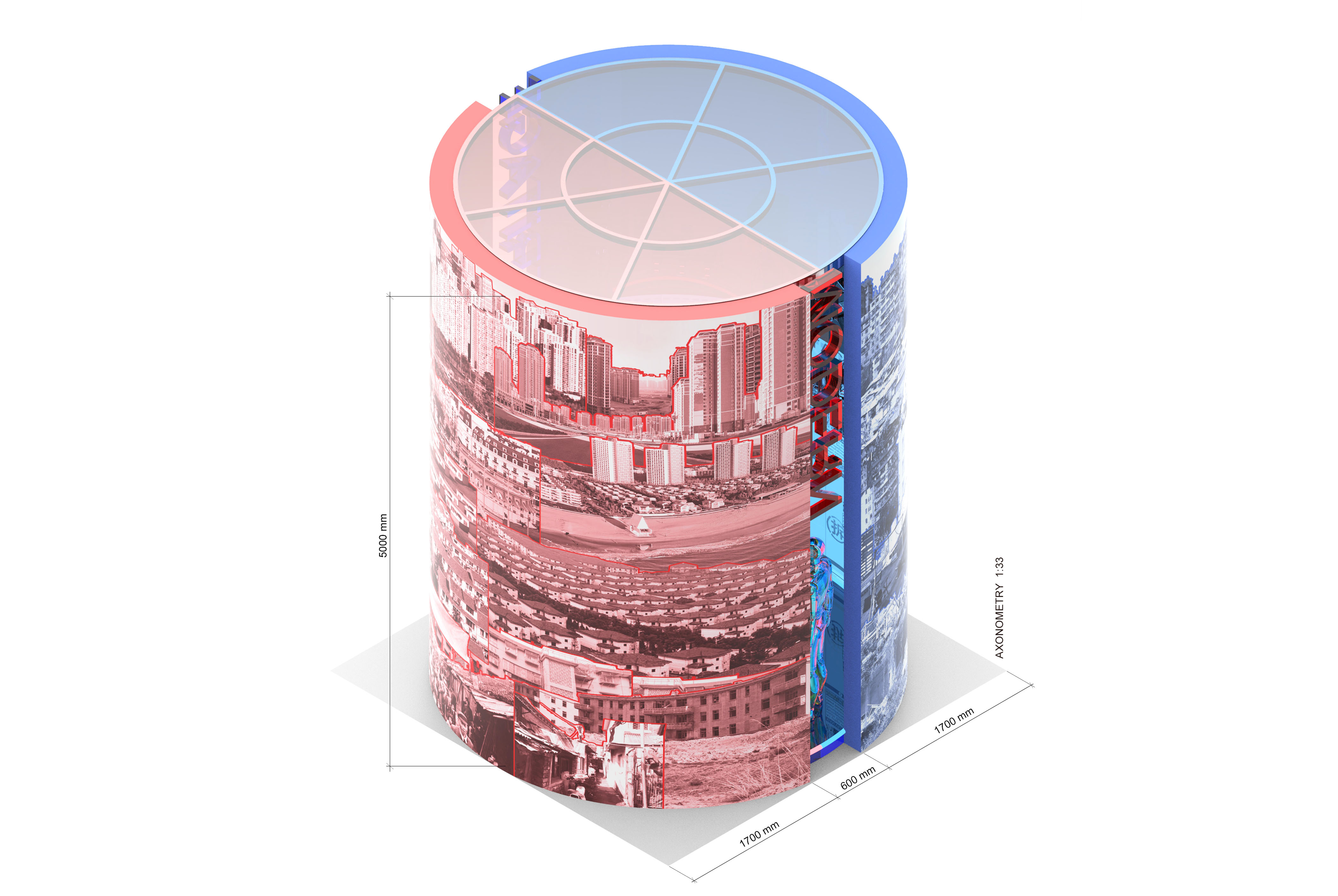 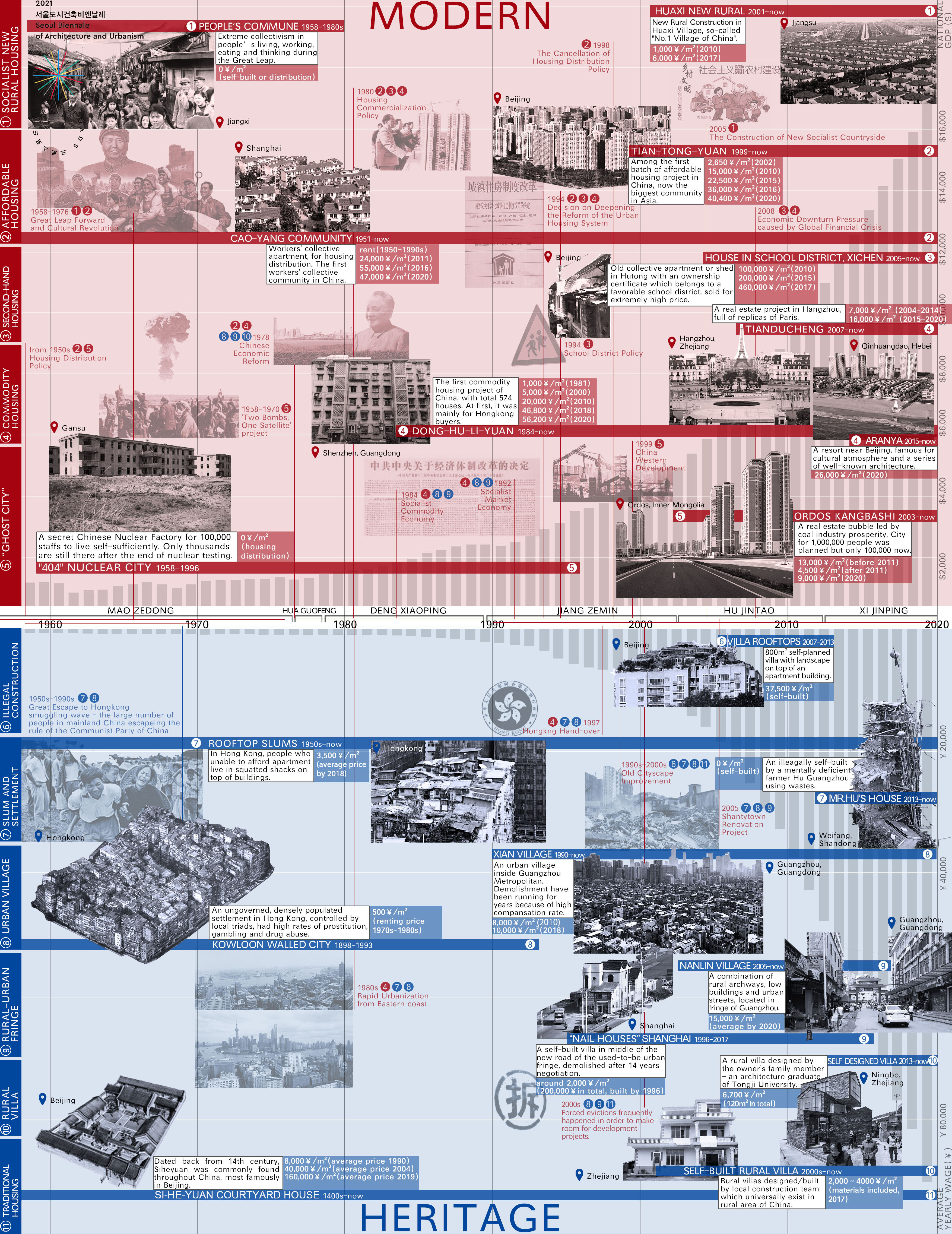 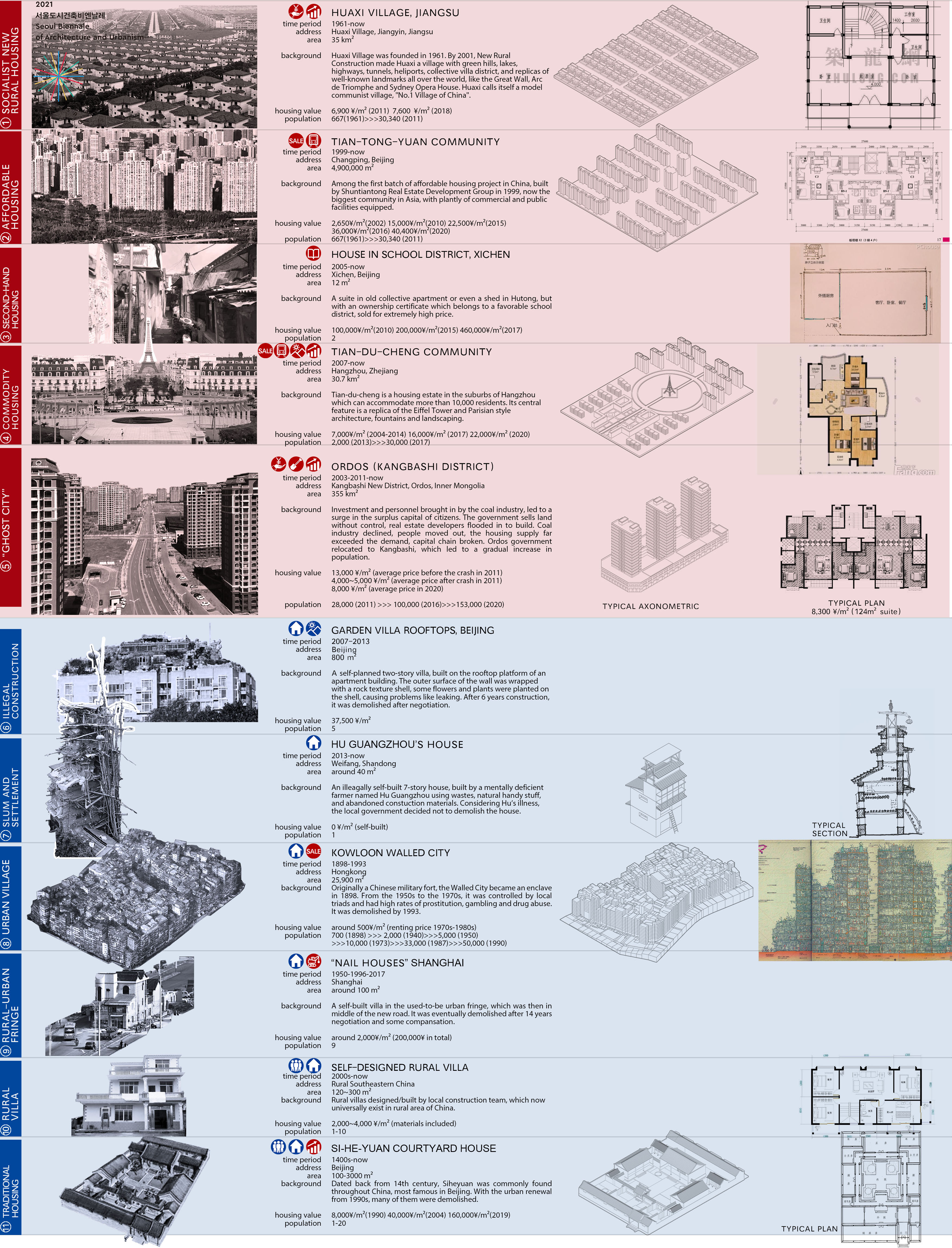 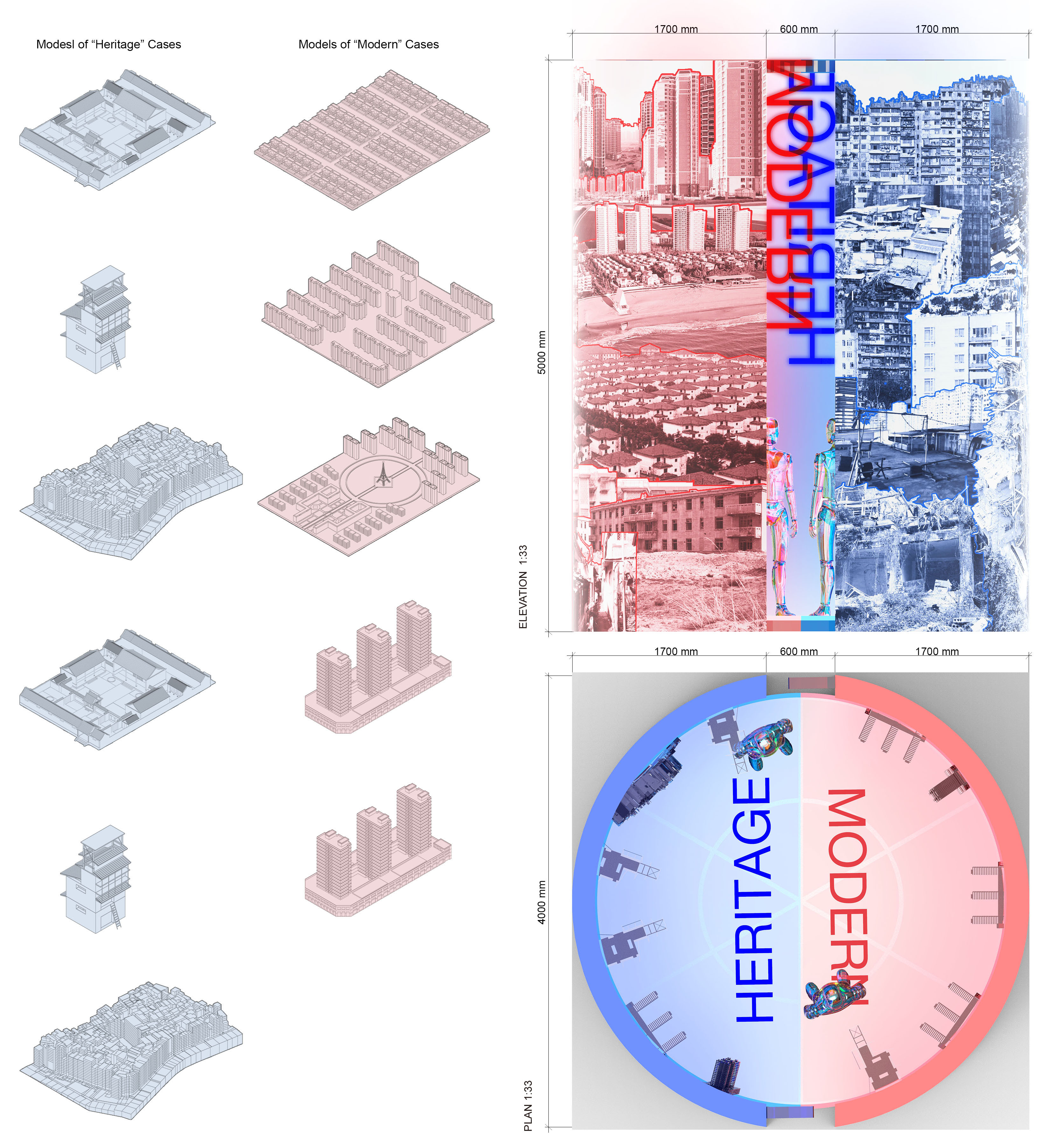 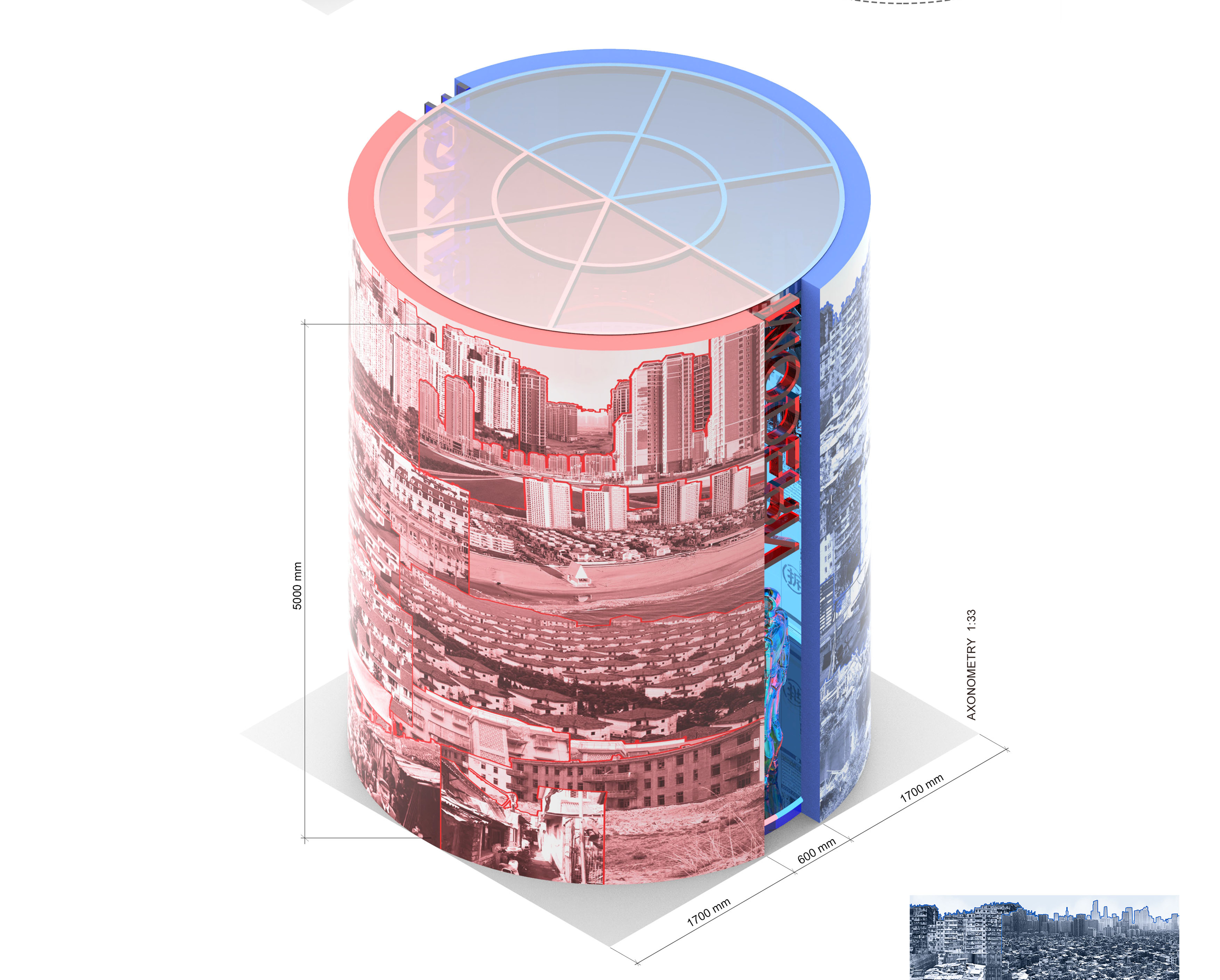